This week marks the 37th anniversary of Apple’s famous “1984” television ad that aired on January 22, 1984, during the third quarter of the Super Bowl XVIII between the Los Angeles Raiders and Washington Redskins

1984 Apple Computer Macintosh commercial conceived by Chiat/Day and directed by Ridley Scott was nationally aired on television only once – during the 3rd quarter of the 1984 Super Bowl football game.

Based on George Orwell’s novel, Nineteen Eighty-Four (authored in 1949) the spot provided the allegory of the new Apple Macintosh computer providing an inspirational creative spark that would free individuals from the overbearing control of “Big Brother” – presumably, IBM’s Personal computer.

The heroine (Anya Major) running with her sledgehammer 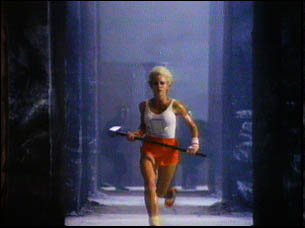