Sony Music Entertainment’s The Thread Shop merchandise agency sign an agreement to produce a merchandise line for The Beatles. Now, the company has signed a similar deal for another rock legend: Jimi Hendrix.

The new deal with Authentic Hendrix LLC and Experience Hendrix LLC — includes the rights to design, develop and distribute exclusive Hendrix merchandise goods, wares, lines and products worldwide, including clothing, accessories and collectibles. The product line will be available online, in pop-up shops and at brick-and-mortar retail stores.

In addition to Hendrix and The Beatles, The Thread Shop’s roster includes the likes of Camila Cabello, Bob Dylan, Joan Jett, Led Zeppelin, Maluma and P!nk.

Sir James Paul McCartney MBE (born 18 June 1942) is an English singer-songwriter, multi-instrumentalist, and composer. With John Lennon, George Harrison, and Ringo Starr, he gained worldwide fame as the bassist of British rock band the Beatles, one of the most popular and influential groups in the history of pop music; his songwriting partnership with Lennon is one of the most celebrated of the 20th century. After the band's break-up, he pursued a solo career and formed Wings with his first wife, Linda, and Denny Laine.

McCartney has been recognised as one of the most successful composers and performers of all time, with 60 gold discs and sales of over 100 million albums and 100 million singles of his work with the Beatles and as a solo artist. More than 2,200 artists have covered his Beatles song "Yesterday", more than any other copyrighted song in history. Wings' 1977 release "Mull of Kintyre" is one of the all-time best-selling singles in the UK. A two-time inductee into the Rock and Roll Hall of Fame (as a member of The Beatles in 1988, and as a solo artist in 1999), and a 21-time Grammy Award winner (having won both individually and with the Beatles), McCartney has written, or co-written 32 songs that have reached number one on the Billboard Hot 100, and as of 2014 he has sold more than 15.5 million RIAA-certified units in the United States. McCartney, Lennon, Harrison and Starr received MBEs in 1965, and in 1997, McCartney was knighted for his services to music.

McCartney has released an extensive catalogue of songs as a solo artist and has composed classical and electronic music. He has taken part in projects to promote international charities related to such subjects as animal rights, seal hunting, land mines, vegetarianism, poverty, and music education. He has married three times and is the father of five children.

When 73 million Americans tuned into The Ed Sullivan Show at 8pm sharp on February 9, 1964 they had no idea that they were watching history in the making. The Beatles, only on American soil for less than 48 hours by the time they took the stage that night had no idea either that the next hour of their debut would come to define an entire generation and be the catalyst for a vast musical career that would influence quite literally every rock band thereafter in some way.

The Beatles LOVE by Cirque du Soleil: Technical information for the most extravagant, immersive feast for the senses. 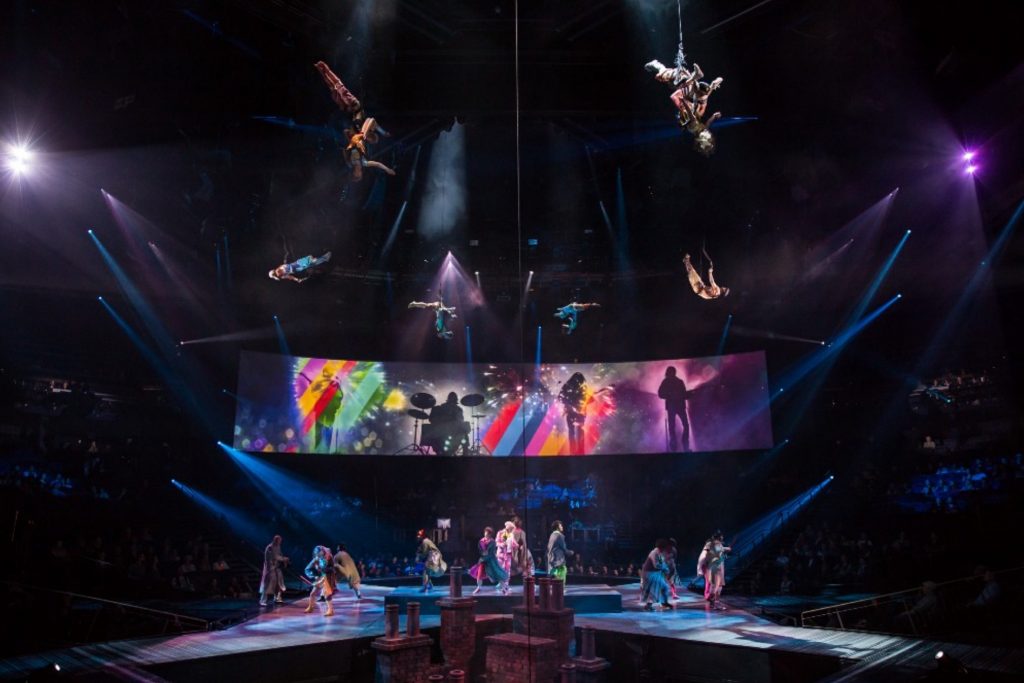 As officially the biggest-selling band or artist of all time, at more than 271 million RIAA-certified albums sold partnered with Cirque du Soleil together have created “The Beatles LOVE” at The Mirage hotel in Las Vegas, NV.
The LOVE theater at The Mirage houses 6,351 speakers and 2,013 seats set around a central stage. Each seat is fitted with three speakers, including a pair in the headrest. The stage includes 11 lifts, 4 traps, and 13 automated tracks and trolleys. Each lift is capable of lifting 20,000 pounds. The LOVE theater features 32 digital projectors. The theater is set up as a circular theater in the round, with seats 360 degrees around the stage.
The LOVE theater, at The Mirage, cost more than $100 million.
The LOVE theater is filled twice a night, 7 days a week for 10+ years. The people to our left were from Canada, people to the right were from South America, folks behind us were from France.
Please do yourself a favor and see this show before it is gone. 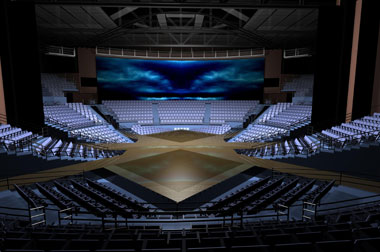 A 50th-anniversary reissue of the 1968 White Album by The Beatles has been confirmed by Paul McCartney after months of speculation.
The original White Album was released on November 22, 1968 in Britain and three days later in the US., so that anniversary week in 2018 may be a likely date, tying in with Thanksgiving and Black-Friday sales.
It is also known as "The White Album", is their ninth studio album.
‘50 YEARS AGO: THE BEATLES ‘YELLOW SUBMARINE’ WAS RELEASED.
Yellow Submarine was primarily the brainchild of George Dunning and Al Broadax — the same duo that spearheaded the Beatles cartoon TV series that aired in the U.S. from 1965-69 — along with art director Heinz Edelmann and Lee Minoff, who wrote the story. But the Beatles wanted as little involvement as possible, so actors were brought in to recreate their voices.
The Simpsons Wouldn't Exist Without Yellow Submarine.
The movie would fundamentally changed the way viewers experience animation. This year, Yellow Submarine celebrates its 50th anniversary. In the half century since its release, animation has evolved beyond what could have imagined in the '60s.
RE-RELEASE
The Beatles’ animated feature film, “Yellow Submarine,” will be re-released in North America in July in celebration of its 50th anniversary

It was 51 years ago today that The Beatles officially released their landmark LP Sgt. Pepper's Lonely Hearts Club Band in the U.K., though their label rushed copies into some stores six days early on May 26. (It went on sale in the U.S. on schedule on June 2.) Whenever you want to mark that anniversary, the record has been a point of reference for popular music ever since.

Works gifted by Paul McCartney, ex-Beatle will join the London’s Photography Centre national archive. The archive of Linda McCartney contained 63 photographs of the most important names in rock music from 1960s – 1970s as well as nature, private and sentimental family photographs.
Linda McCartney, who died in 1998 has donated to London’s Victoria and Albert Museum pictures spanning the four-decade career of the photography by her and husband Paul McCartney.
Supporting photo notes:
'The Beatles at Brian Epstein's home in Belgravia at the launch of Sgt. Pepper’s Lonely Hearts Club Band, London, 1967' by Linda McCartney© (1941–1998). Paul McCartney/Linda McCartney 1967

George Harrison @ 75: Perhaps the quietest Beatle and most popular.

Harrison, who died in 2001, would have turned 75 on Feb. 25. But it’s not just his friends and contemporaries who recall him with fondness. In the years since his passing, the Beatle known as “the Quiet One”

In the years after Lennon’s death, Harrison retreated. But he returned with a vengeance in the late 1980s. By the 1990s he had found his voice again.

George Harrison was an English guitarist, singer-songwriter, and producer who achieved international fame as the lead guitarist of the Beatles.

The curtains swept open and America had its first look at the band—not in black leather and stagy scowls, not intimidating, as some had feared, but neatly groomed, all smiles, vaguely harmless: a pleasant surprise. The Beatles! Without hesitation, they launched right into a crisp if workmanlike version of “All My Loving,” a cut from their freshly minted LP, Meet the Beatles, which topped Billboard ’s charts the following week and remained there until it was knocked off by their sec

Ringo’s drums erupted into “She Loves You,” jolting the audience. The last two numbers were even more riveting. Both “I Saw Her Standing There” and “I Want to Hold Your Hand” delivered on the promise of something thrilling.

The phenomenon unfolded in living rooms across the country. According to the A.C. Nielsen Co., the viewing audience was estimated at about 74 million people, reflecting a total of 23.24 million homes, a record for any TV show.

Ringo, 77, real name Richard Starkey, joined the Beatles as a replacement drummer for Pete Best in 1962 and occasionally sang lead vocals, notably in "Yellow Submarine" and "With a Little Help from my Friends."

The Beatles’ boldest album gets an impressive anniversary reissue.

Sgt. Pepper's Lonely Hearts Club Band was the eighth studio album by English rock band the Beatles. Released on 1 June 1967, it was an immediate commercial and critical success, spending 27 weeks at the top of the albums chart in the United Kingdom and 15 weeks at number one in the United States. The album was recognized for its innovations in music production, songwriting and graphic design.