Jimi Hendrix, born Johnny Allen Hendrix at 10:15 a.m. on November 27, 1942, at Seattle’s King County Hospital, was later renamed James Marshall by his father, James “Al” Hendrix. Young Jimmy (as he was referred to at the time) took an interest in music, drawing influence from virtually every major artist at the time, including B.B. King, Muddy Waters, Howlin’ Wolf, Buddy Holly, and Robert Johnson. Entirely self-taught, Jimmy’s inability to read music made him concentrate even harder on the music he heard.

On September 21, 1969 at the Jai-Alai Fronton, in Miami, FL I had the rare opportunity to work for Hendrix’s sound reenforcement company. The entire evening I stood less than 20-feet away from him. Riveted to watching him play every note.

The 27 Club is in remembrance of popular musicians who died at the age of twenty-seven. The ‘club’ is generally taken to include Brian Jones, Jimi Hendrix, Janis Joplin, Jim Morrison, Kurt Cobain and Amy Winehouse

Does anyone know why a large majority of Hendrix's' songs, he tunes a half step down. … step down.
I have always thought it was:
a) for singing and
b) because it is easier to bend the strings if they're tuned down.
Jimi Hendrix Trivia: All Along the Watchtower
The rhythm guitar you hear in the beginning of “All Along the Watchtower” is a 12 string acoustic performed by Dave Mason. The 12 string is a key part of what makes All Along The Watchtower so distinctive. You will notice if you play the chords on a regular 6 string it just doesn’t have the right feel to it.
Basic Jimi Hendrix Woodstock Rig Setup 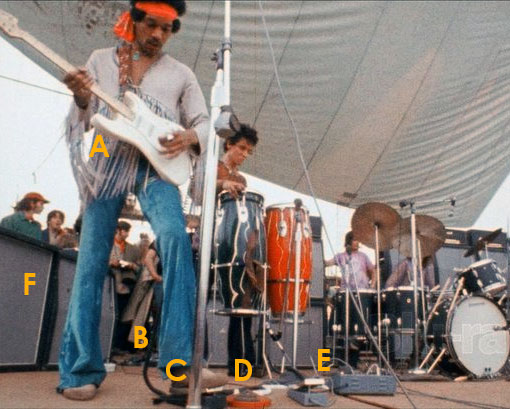 Let’s start by looking at the rig Jimi Hendrix used in his famous performance at Woodstock in 1969.
This is quite a basic setup so let’s look through the labelled gear:
A: 1968 Fender Stratocaster
B: Coiled Cable
C: VOX wah pedal
D: Dallas-Arbiter Fuzz Face
E: Uni-Vibe with expression pedal
F: Marshall 100w Superlead Plexi heads with 4×12 stacks 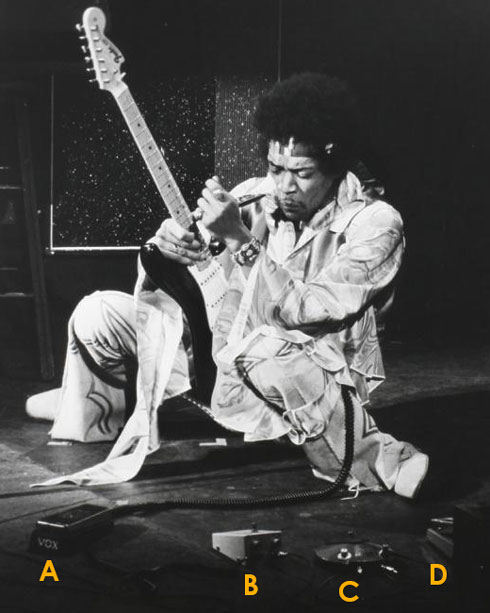 In addition to the
(A) VOX wah
(B) Uni-Vibe
(C) Fuzz Face
(D), this rig includes an Octavia
The Octavia (also known as Octavia Fuzz, Octafuzz and Octavio) was a prototype when Hendrix used it. It was designed by Roger Mayer – Hendrix’s sound technician. It mixes in an octave higher than the original input as well as add in some fuzz distortion.
The Uni-Vibe was created to simulate the sound of a Leslie speaker. Think of it as a chorus/vibrato/phaser pedal. This is again a key component to achieving a great Hendrix tone because it is such a distinctive and unique effect.

Conservatives cringed @ his rendition of Star Spangled Banner @ the time, but now it is iconic piece of American music. RIP Jimi.

WORCESTER, Mass. – Fifty years ago, on Aug. 18, 1969, legendary guitarist Jimi Hendrix stepped onto the stage at the Woodstock, N.Y., Music Festival and started upon an uninterrupted set lasting nearly two hours — one of the longest performances of his career. It concluded with a long medley that included the solo performance of the Star Spangled Banner that would become emblematic not only of Woodstock, but of the 1960's.